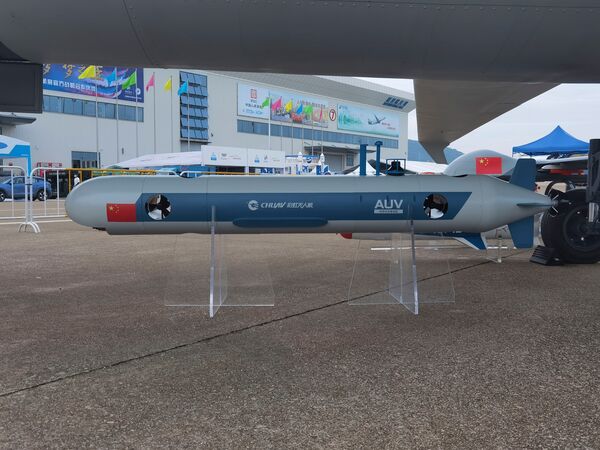 Chinese defence prime China Aerospace Science and Technology Corporation (CASC) is showcasing for the first time its airdroppable autonomous underwater vehicle (AUV) concept at Airshow China 2021, which is being held in Zhuhai from 28 September to 3 October.

Developed by CASC subsidiary China Academy of Aerospace Aerodynamics (CAAA, also known as the 11th Academy) in Beijing, the Multi-mission Reconfigurable Autonomous Underwater Vehicle features a modular seaframe that has a diameter of 0.32 m and measures between 3 m and 4 m in length depending on its configuration.

The forward half of the AUV comprises the nose module, which houses a high-frequency, short-range forward-looking sonar to aid obstacle avoidance and the first of two buoyancy modules that house ballast tanks for depth control as well as a set of horizontal and vertical tunnel thrusters designed to enhance the AUV's low-speed lateral manoeuvrability and enables it to hover.

The sealed payload module is positioned in the AUV's midsection, which can house a range of equipment focused on mission capabilities and situational awareness, such as multibeam echo sounders, flank-array sonar, high-resolution gap-filler sonars, synthetic aperture sonars, as well as sub-bottom profilers, and a variety of other active and passive sensors.

Aft of the payload module is communications and navigation module, which is equipped with a retractable mast containing antennas for satellite communication, wireless local area network, and marine very high frequency radio connectivity when surfaced, and an acoustic modem for underwater communication.