Airbus has announced two major milestones for its A400M transport aircraft, announcing on 25 May delivery of the 100th aircraft and the clocking up of 100,000 flight hours across the international fleet. 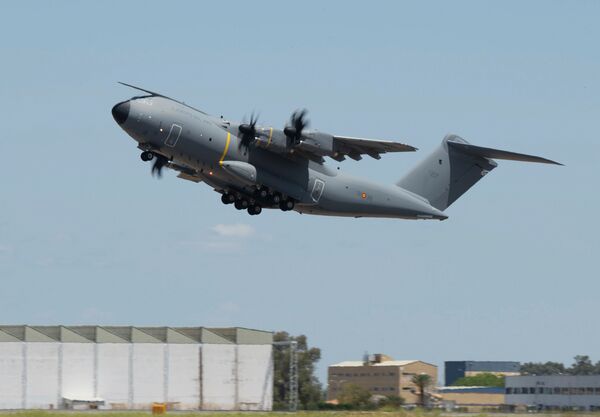 The 100th A400M departs the Seville final assembly line for the Spanish Air Force base at Zaragoza. (Airbus)

Aircraft MSN111 departed the Seville final assembly line (FAL) for delivery to the Spanish Air Force in nearby Zaragoza on 24 May. In the same week the eight-nation fleet passed 100,000 flight hours.

“These milestones clearly demonstrate the maturity of the A400M programme on all fronts,” Airbus said.

The 100th customer delivery came some eight years after MSN7 was handed over to France in 2013 (previous aircraft in the MSN sequence had been company-owned test vehicles, as were some latter ones. MSN23 for Turkey was lost in a 2015 accident prior to delivery).

The 100,000 hours have been accumulated by all the partner nations of Belgium, France, Germany, Luxembourg, Spain, Turkey, and the United Kingdom, plus one export customer, Malaysia.

Airbus has a 174-aircraft order book for the A400M that comprises 53 for Germany, 50 for France, 27 for Spain, 22 for the UK, 10 for Turkey, eight for Belgium (including one operated on behalf of Luxembourg), and four for Malaysia.

Airbus has announced two major milestones for its A400M transport aircraft, announcing on 25 May del...