Airbus Helicopters has begun assembly of its Rapid And Cost-Efficient Rotorcraft (RACER) concept, the company announced on 14 April. 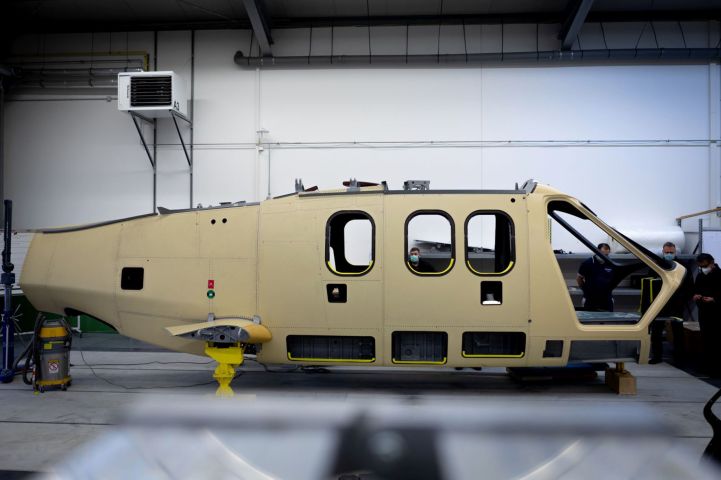 The Airbus RACER high-speed helicopter in assembly in April. Flight trials are due to begin in 2022. (Airbus Helicopters)

CEO Bruno Even tweeted that the high-speed demonstrator is being built ahead of the commencement of flight trials in 2022.

First revealed at the Paris Airshow in 2017, the RACER is geared toward providing the best trade-off between speed, cost-efficiency, sustainability, and mission performance. The concept has a stated goal of a cruise speed of more than 400 km/h (250 mph).

To achieve this performance, the helicopter builds on the company’s X3 demonstrator, which features an EC 365 Dauphin airframe fitted with two stub-wing mounted propellers for forward propulsion in high-speed flight. The tail rotor of the X3 has been replaced by a fixed stabiliser assembly and, while the X3’s propellers were in the conventional ‘pull’ configuration, the RACER’s propellers have been reversed into the ‘push’ configuration instead.

Further to proving high-speed flight, the RACER is also looking to increase the helicopter’s fuel efficiency. The lateral rotors and the main rotor will be driven by two RTM322 engines, with an ‘eco mode’ for an electrically powered start and stop of one engine in flight for fuel savings and increased range.

As previously reported by Janes, the RACER demonstrator will benefit from a hybrid metallic-composite airframe, specifically designed for low weight and low recurring costs. It will also be equipped with a new high-voltage direct current (DC) electrical generation system, which will significantly contribute to weight reduction.