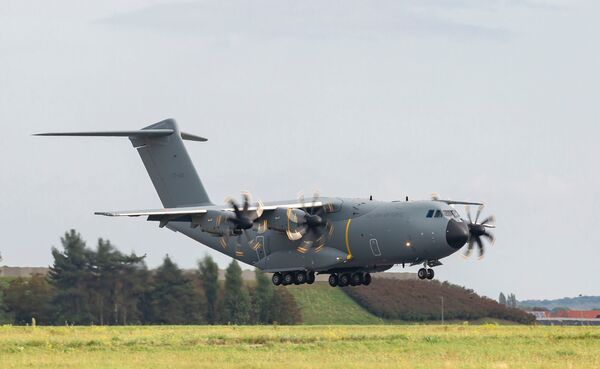 Aircraft CT-04 is the third A400M to be delivered to Belgium, and the fourth for the bi-national 15th Air Transport Wing established with Luxembourg. Its delivery into Melsbroek on 23 September brings to 101 the number of A400Ms now received by international customers. (Belgian Air Component)

Airbus has advanced deliveries of the A400M Atlas airlifter, with Belgium receiving its latest aircraft on 23 September.

Aircraft CT-04 was the third for the Belgian Air Component (BAC), and the fourth A400M to be delivered to the bi-national 15th Air Transport Wing that Belgium has established with Luxembourg at Melsbroek (the military area of Brussels airport). It brings to 101 the total now delivered to international customers.

The joint Belgian-Luxembourg Bi-National Unit (BNU) is due to receive its four remaining A400Ms by the end of 2023, with full operating capability for the unit slated for the end of 2024. These aircraft will be made available to the European Air Transport Command, and through that the European Rapid Reaction Force.

Belgium was the last of the seven partner nations to receive the A400M when the first of its seven aircraft arrived in December 2020, following the earlier commencement of deliveries to France (50), Germany (53), Luxembourg (1), Spain (27), Turkey (10), and the United Kingdom (22). Malaysia, the programme's first export customer, had also received its four aircraft.

Earlier in 2021, Airbus announced that Kazakhstan had joined the programme with an order for two aircraft, while Head of Military Aircraft at Airbus, Jean-Brice Dumont, recently told Janes and other defence media that the company expects to announce further near-term salesfor the aircraft.