A software load error meant that a first flight demonstration of the US Air Force’s Golden Horde networked collaborative weapons programme resulted in only partial success.

The test, undertaken at the end of 2020, used technology developed by the Air Force Research Laboratory (AFRL) and Scientific Applications & Research Associates (SARA). Two modified Boeing GBU-39 Small Diameter Bomb I (SDB I) munitions were released, but a software glitch meant that targeting updates could not be communicated between the weapons as planned.

The Golden Horde initiative, selected in 2019 as an Air Force Vanguard programme, integrates datalink radios and collaborative behaviours to allow guided weapon systems to work together dynamically in real time to prioritise and defeat targets. This shared data is used to improve information across an entire group or ‘swarm’ of weapons to defeat adversary defences and improve overall effectiveness.

Golden Horde uses a collaborative autonomy approach based on a ‘playbook’ of collaborative algorithms loaded prior to the mission. A ‘play’ is an established collaborative behaviour enabled, or disabled, when certain predefined conditions are met by the swarm: the system only selects from set plays and cannot violate defined Rules of Engagement. 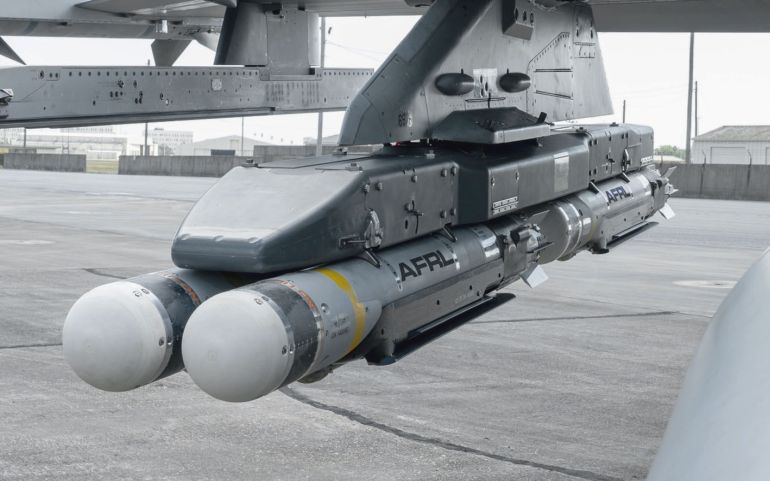 Four CSDB-1 munitions hang from the wing of an F-16 fighter from the US Air Force Test Center’s 96th Test Wing at Eglin Air Force Base, Florida. Two of the bombs were dropped during the first flight demonstration of the Air Force Golden Horde Vanguard. (AFRL)

A software load error meant that a first flight demonstration of the US Air Force’s Golden Horde net...

AeroVironment Inc. has disclosed development of a new category of medium-sized, man-portable loiteri...