The government of Afghanistan has sent in additional troops to defend the capitals of the provinces of Helmand and Herat amid Taliban attacks on at least three major Afghan cities and a rapidly deteriorating security situation in the Central Asian country.

The Afghan Ministry of Defense (MoD) announced on 1 August that special forces were sent to Lashkar Gah in southern Helmand and to the western city of Herat, the latter of which saw the deployment of “hundreds” of commandos to “increase offensive operations” and prevent the Taliban from taking over the country's third-largest city. 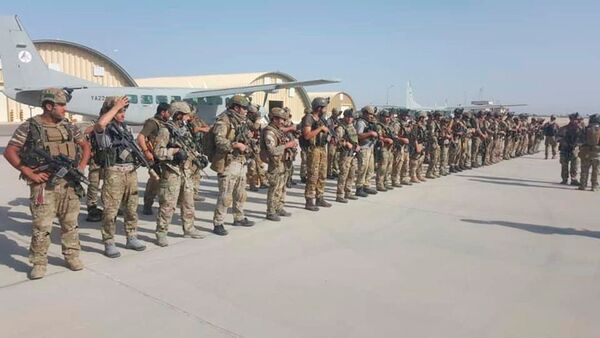 Afghan special forces after arriving in Herat on 1 August to help defend the western Afghan city from Taliban attacks. (Afghan Ministry of Defense)

After having captured large swathes of rural territory, about half of Afghanistan's 419 district centres, and several key border crossings, the Taliban now appear to have their sights set on Afghanistan's provincial capitals, none of which has yet to fall.

The Afghan National Defense and Security Forces (ANDSF) were reportedly fighting in the city alongside former anti-Soviet commander Ismail Khan, who mobilised citizens to fight the Taliban.

Meanwhile, the United Nations accused “anti-government elements” of carrying out an attack against the UN's main compound in the city on 30 July that resulted in the killing of an Afghan security guard and injuries to other personnel. The Reuters news agency quoted unnamed officials as saying that the assault, which involved rocket-propelled grenades and gunfire, took place a few hours after Taliban fighters had penetrated deep into Herat City.

The government of Afghanistan has sent in additional troops to defend the capitals of the provinces ...