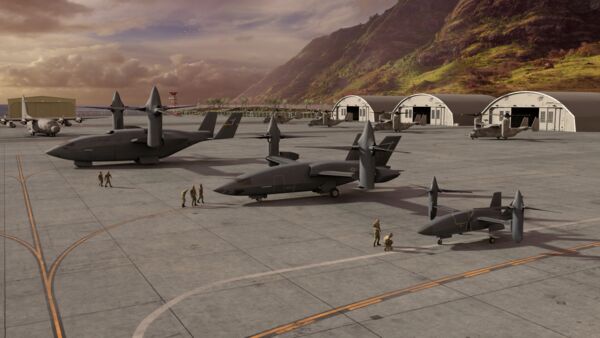 Bell has developed concepts of three jet-powered High-Speed Vertical Take-off and Landing (HSVTOL) aircraft, which it promoted at the Air Force Association's (AFA's) annual conference with a pair of large illustrations.

Jeff Nissen, Bell senior manager of advanced technology, told Janes on 21 September at the conference that the company has designed a Heavy, a Medium multirole capability, and a Light aircraft. Bell designed the aircraft around speed, range, and survivability: jet-like cruise speeds over 400 kt, range to meet specific operations, runway independence and hover endurance, and survivability to operate in contested environments.

AFWERX, in partnership with the US Air Force and US Special Operations Command, launched the HSVTOL Concept Challenge to advance solutions to achieve optimal agility in austere environments. Critical mission profiles include infiltration and exfiltration of special operations forces (SOF) and equipment, personnel recovery, aeromedical evacuation, and tactical mobility, according to an AFWERX statement.

Nissen said the basic configuration of Bell's three HSVTOL aircraft is a jet that takes off and lands vertically, but still retains good hover performance. A crucial objective was to maintain tiltrotor and helicopter-like manoeuvrability and hover efficiency.

Nissen said an operator could utilise a helicopter mode with a turboshaft engine capability for take-off and landing before converting to a ‘fixed-wing' mode as would a tiltrotor. These concepts have the added capability to stop and fold the rotor in flight and then glide on the turbofan for high-efficiency, high-altitude cruise. He said the scalability of the technology ranges from 1,814 kg to more than 45,359 kg.