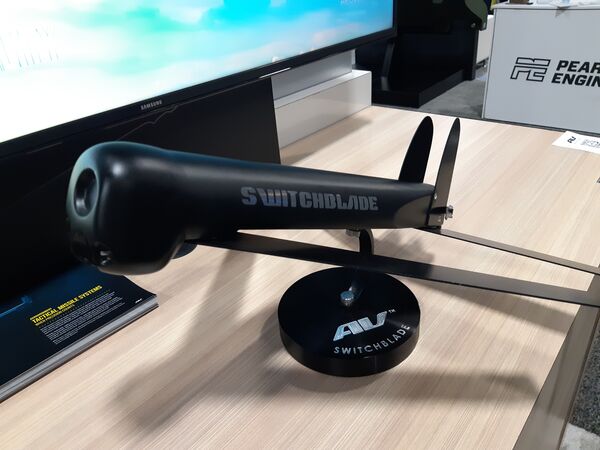 A model of the AeroVironment Switchblade 300 loitering munition on display at the 2021 Association of the United States Army trade show in Washington, DC. The company deployed the munition from its Arcturus Jump 20 UAV for the first time. (Janes/Pat Host)

Brett Hush, company vice-president and general manager for tactical missile systems, told Janes on 4 November that it is rare for a UAV similar in size to the Jump 20 to be armed. He said that it is more common for larger aircraft such as the General Atomics Aeronautical Systems Inc MQ-9 Reaper to have weapons, but that these aircraft also require a larger ground footprint for support.

Hush said utilising the Switchblade 300 from the Jump 20 not only allows users to attack targets at range, but also provides an intelligence, surveillance, and reconnaissance (ISR) capability that only requires a small team on the ground to operate. Firing the Switchblade 300 from the Jump 20 no longer requires users to co-ordinate with other air assets or ground assets to prosecute a target, as do unarmed UAVs with similar size to the Jump 20, he said.

The capability also extends the Switchblade 300's range beyond 10 km, although Hush declined to specify exactly how far. This is because not only does the Jump 20 carry the loitering munition before it is expended, but also allows the Switchblade 300's antenna to perform relay communications at higher altitude. Terrain previously limited the loitering munition's range to 10 km because of its direct line-of-sight antenna, he said.