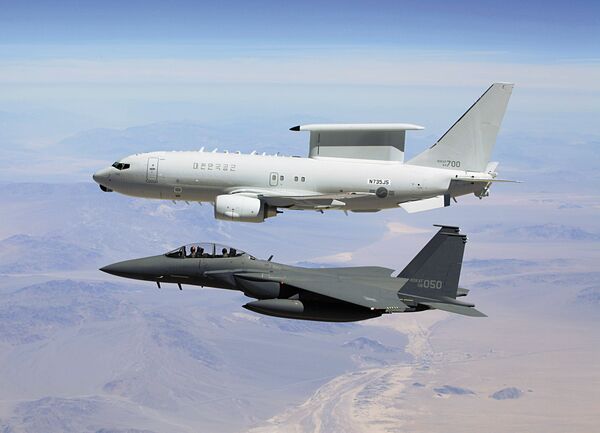 A RoKAF F-15K Slam Eagle flies alongside a Peace Eye AEW&C platform. Both platforms have featured in the service's modernisation efforts over years, geared at addressing the persistent threat from North Korea. (Boeing)

Despite an increased emphasis on participating in multinational operations over recent years, the focus for the Republic of Korea Air Force (RoKAF) remains in countering the persistent threat from the Democratic People's Republic of Korea (DPRK) to the north.

As noted by Janes World Air Force (JWAF), the RoKAF is a full-spectrum air arm, fielding the latest capabilities in the domains of air defence, strike, air mobility, and intelligence, surveillance, and reconnaissance (ISR).

As it looks to continue to modernise its capabilities, the RoKAF has been implementing its five priority programmes. These comprise the procurement and development of the F-35A and KF-X fifth-generation fighters, ballistic missile defence (BMD) systems such as Patriot PAC‐3, airborne early warning and control (AEW&C) platforms, tanker aircraft, and a new integrated C4I system.

Despite an increased emphasis on participating in multinational operations over recent years, the fo...