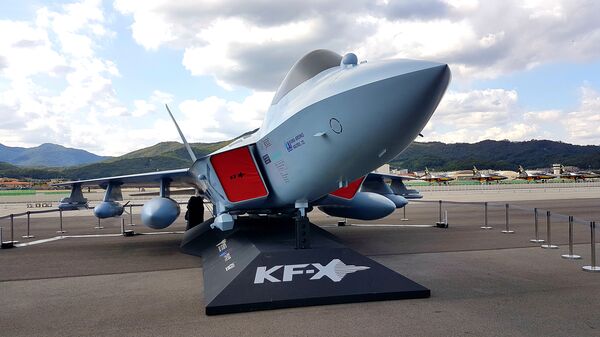 A full-scale mock-up of the KF-X, since renamed KF-21 Boramae, was revealed by Korea Aerospace Industries at the ADEX event in Seoul in late 2019, and the domestically developed fifth-generation fighter is expected to feature strongly at this year's event also. (Janes/Gareth Jennings)

With the main event at ADEX 2019 being the unveiling of a full-scale mock-up of the aircraft, this year's event running from 19 to 24 October will provide Korea Aerospace Industries (KAI) with an opportunity to update political, military, and media members on the progress that has been charted over the last two years.

The KF-X fighter concept was first revealed by South Korea's Defense Acquisition Program Administration in 2010. Indonesia joined the project in 2012, with a memorandum of understanding covering joint development of the platform that Jakarta refers to as IF-X. Initial operational capability was scheduled for 2023. However, budgetary constraints and technical concerns caused the baseline configuration to be redefined on several occasions, with the Ministry of National Defense deciding in 2014 to settle on a full-up fifth-generation platform based on the original twin-engined design.

With a full-scale mock-up of the intended design having been revealed in 2019, KAI has since backed this up with a new KF-21 designation and Boramae name for the aircraft, as well as the announcement in September 2020 that it had begun final assembly of the first prototype. This prototype was formally rolled out on 9 April, and is expected to fly for the first time in 2022. In January, a KAI spokesperson told Janes