ADEX 2019: KUS-VH in ‘holding pattern' while RoKA decides way ahead 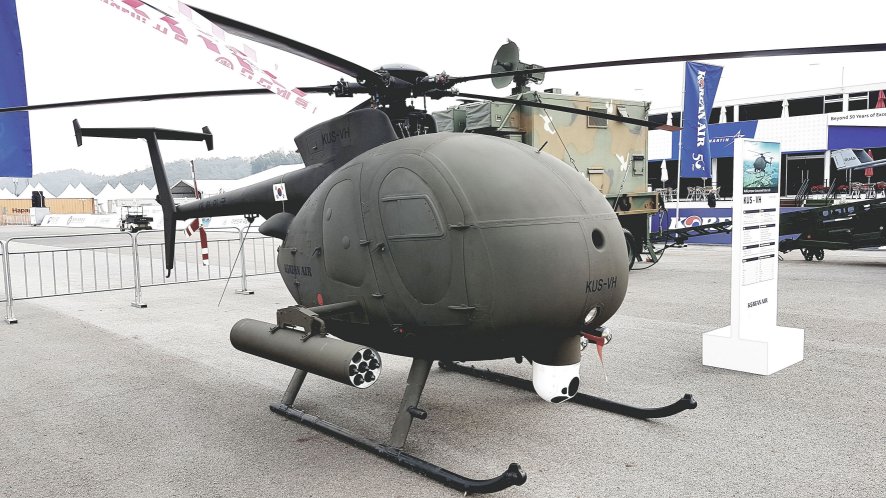 Although displayed at ADEX 2019, the KUS-VH is now waiting on a RoKA decision as to whether the unmanned MD 500 will be rolled out operationally. (IHS Markit/Gareth Jennings)

With the first flight of the KUS-VH having taken place in July, a company official told Jane’s on 15 October that demonstrations to the RoKA continue, but that the design is now finalised ahead of any decision to progress the programme.

The KUS-VH is essentially an unmanned version of the MD 500 Little Bird light-attack and observation helicopter, of which the RoKA has 175 still in service (130 MD 500s in the observation role and 45 BGM-71 TOW missile-equipped Defender platforms in the light-attack role). These were licence-built in the 1970s by KAL-ASD, so the Korean company has the proprietary knowledge and skill sets necessary to convert these ageing helicopters into unmanned aerial vehicles (UAVs).

Having been revealed in 2015 and flying for the first time in an optionally piloted KUS-10 configuration in 2016, the KUS-VH has been developed with help from Boeing, which has previously demonstrated its own H-6U unmanned Little Bird to the RoKA. The helicopter displayed at the ADEX defence exhibition in Seoul was equipped with 70 mm rockets and air-to-surface missiles for the ground-attack role. Performance details of the KUS-VH have not been disclosed, although the manned MD 500 on which it is based has a top speed of 152 kt, a range of 605 km, and a service ceiling of 16,000 ft.

Boeing has delivered the first two of 78 contracted F/A-18 Block III Super Hornets to the US Navy (U...

The Pentagon and Lockheed Martin have agreed to adjust expectations for future deliveries, also know...