Korea Aerospace Industries (KAI) is aiming to continue to expand exports over the medium and long term, leveraging capabilities in a range of existing and future aerospace products.

Chan Hui Bae, KAI᾿s vice-president and general director for international business development, told Jane’s on 17 October that in 2018 the company’s exports accounted for about one-third of its total annual revenues of KRW2.78 trillion (USD2.34 billion). 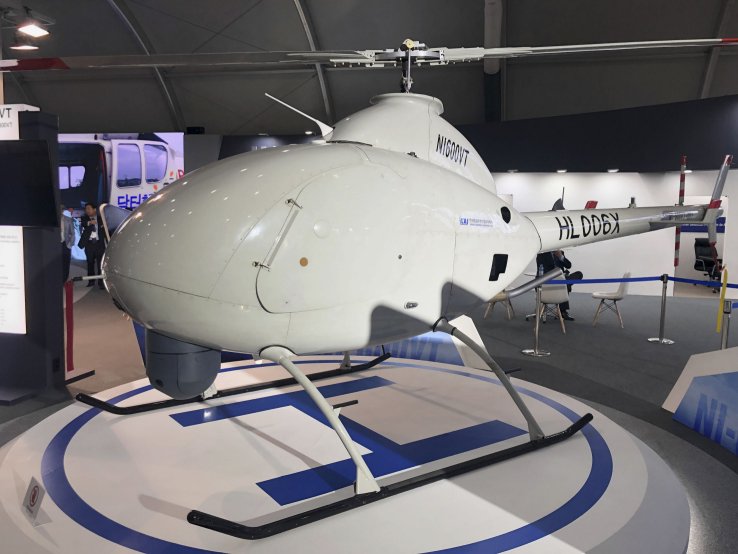 KAI is aiming to position new products – such as its NI600VT unmanned helicopter (pictured) – in target export countries, particularly in emerging markets, over the coming few years. (IHS Markit/Jon Grevatt)

Speaking at the 2019 Seoul International Aerospace and Defense Exhibition (ADEX), which is being held from 15 to 20 October, Bae said that while that proportion is expected to decline slightly in the near term, KAI’s mid- and long-term targets are to re-expand international sales to approximately one-third of revenues. This means that as KAI’s sales volume gradually increases, so do exports, said BAE.

In the near and medium terms, KAI’s key export products will continue to be the T-50 Golden Eagle advanced jet trainer aircraft and the FA-50 multirole fighter aircraft. Both have secured sales in recent years in Asia and the Middle East. Targets in the near term include the potential for sales of additional T-50s to Thailand and additional FA-50s to the Philippines.

Korea Aerospace Industries (KAI) is aiming to continue to expand exports over the medium and long te...

South Korea’s Defense Acquisition Program Administration (DAPA) has announced that an initiative to ...