Rising at a rate of 1.9% in 2020, defence spending has enjoyed continuous growth since 2014 according to the latest figures from the trusted global agency for open-source defence intelligence

Global spending growth to slow in 2021, but no contraction expected

Although 2020’s growth exceeded that seen in 2019 this acceleration is not expected to extend into 2021. Janes forecasts a noticeable slowdown in defence spending this year, as the economic impact of the Covid-19 pandemic continues to be felt. However, outside of the United States’ gradual decline, the cuts to spending are expected to be limited to regions reliant on the export of commodities such as oil and will be more than balanced out by expansion in regions where robust growth is still expected.

“With all regions except Europe, AsPAC and Latin America likely to implement real reductions in 2021, total defence spending growth will fall to its lowest rate since 2013 – but we’re not expecting an overall contraction. In fact, the worst of the Covid-19 pandemic’s impact on military funding is likely to fall in 2022, when governments may begin to rein in spending,” said Andrew MacDonald, lead analyst at Janes. “Even next year’s global spend is forecast to remain in positive growth, driven in large part by strong expansion in Asia, and in the years that follow the growth of defence budget allocations is likely to accelerate once again, pushing our forecast global total up to USD2.23 trillion by 2030.”

Europe’s resurgence of defence budget growth continued in 2020, but is likely to weaken this year

In percentage terms it was Europe’s military spending power that grew the most in 2020, with funding 5.6% higher than the previous year. However, Asia-Pacific contributed a similar rise in dollar terms, and its spending growth is judged likely to speed up in the coming years, as European budget increases begin to slow.

“Smaller markets are also due to record impressive growth rates in 2021, as Latin American spending rebounds thanks to Brazil’s recovery from sharp cuts imposed last year, and Eastern Europe continues to react to the perceived military threat from Russia,” MacDonald said.

While it is all but certain to force a slowdown in the rise of the world’s annual defence expenditure, the Covid-19 pandemic is extremely unlikely to undermine the long-term strategic shifts that have been under way in regional spending patterns.

“While the pandemic appears likely to stifle the growth in buying power of regions like the Middle East and further depress Russian funding, the relative decline seen in US budgets as Asia-Pacific accounts for an ever-increasing share of the global total remains the big story in military funding, even in the post-Covid world,” MacDonald said.

“In 2010 Asia was responsible for just over 20% of the world’s military funding; by 2028 we’re expecting it to have grown to 35%, overtaking North America as the largest region by value.” 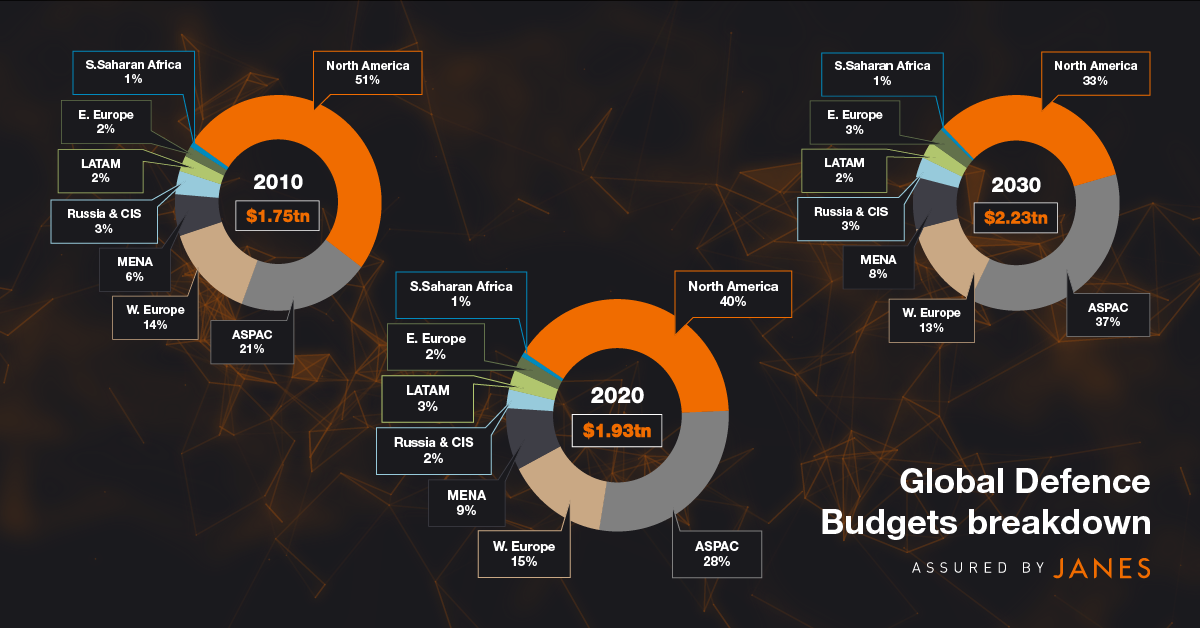 Hear from the analysts who created the report in our latest webinar.