NATO is set to receive its first Airbus A330 Multi-Role Tanker Transport (MRTT) aircraft into Eindhoven Airbase in the Netherlands over the coming weeks. 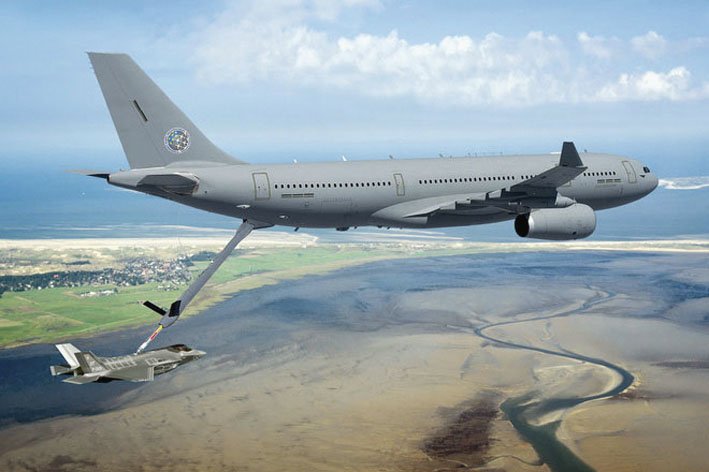 The first two of eight MRTT aircraft to be operated jointly by NATO members Belgium, the Czech Republic, Germany, Luxembourg, the Netherlands, and Norway under the NATO Support and Procurement Agency’s (NSPA’s) Multinational Multi-Role Tanker and Transport Fleet (MMF) are on course to be delivered in June, the agency reported on 14 May.

Managed by the NSPA, with support of the Organisation for Joint Armament Cooperation (OCCAR), the MMF capability will provide the six participating nations pooled access to aerial refuelling (hose-and-drogue and boom/receptacle) strategic passenger and cargo airlift, as well as aero-medical evacuation (medevac) capabilities.

The Netherlands and Luxembourg initially launched the programme in July 2016, with the first one as the lead nation of the project. Germany and Norway joined in 2017, Belgium followed in early 2018, and Czech Republic lastly joined the MMF programme in October 2019. Germany is the largest contributor with a share of 5,500 hours per year. The Netherlands will take up 2,000 hours per year. Belgium will take 1,000 hours, Luxembourg 200 hours, and Norway and Czech Republic will take 100 hours a year each. As the projected utilisation will be 1,100 flying hours per aircraft per year, the fleet of eight aircraft is fully committed. The MMF nations will use these capabilities in support of national missions as well as in support of NATO, EU, and other multinational commitments.