Video footage released online on 12 May by the Vietnam National Defence television channel (QPVN) shows that at least some of the Vietnam People's Army (VPA) T-90S/SK main battle tanks (MBTs) acquired from Russia have been equipped with the Shtora-1 active protection system (APS).

The footage, which was part of a QPVN news programme, showed at least one T-90SK and two T-90S MBTs fitted with the Russian-made APS.

The second distinctive feature on the MBTs, which were shown being displayed at a military base alongside several other tanks and an armoured recovery vehicle, was the Kord 12.7 mm heavy machinegun (HMG) - instead of the organic NSVT 12.7 mm HMG - which was seen installed in a roof-top mount. 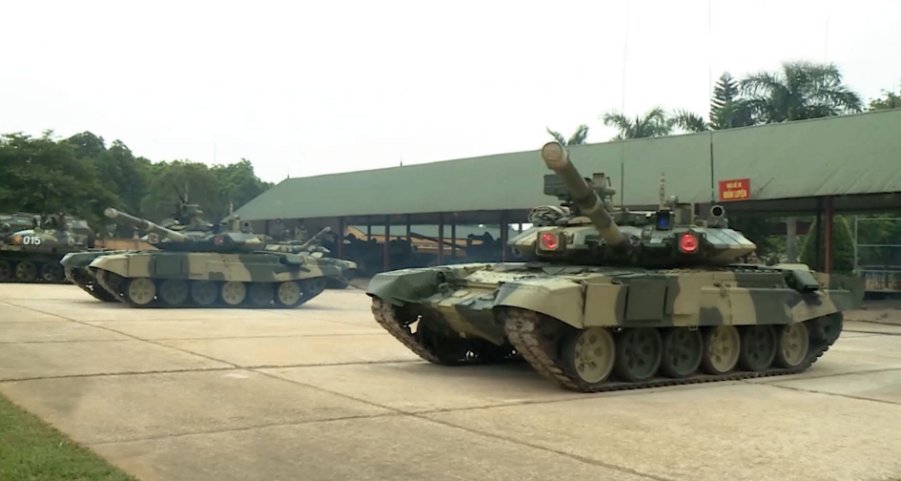 A screengrab from QPVN video footage released on 12 May showing VPA T-90S/SK MBTs equipped with the Shtora-1 active protection system.

The QPVN news report comes after the Russian Federal Service for Military-Technical Cooperation (FSVTS) told Jane’s in March 2019 that Moscow had completed the delivery of 64 T-90S/SK MBTs to Vietnam under a contract signed in 2016.

A representative of the Vietnam People’s Army (VPA) told Janes at the time that the MBTs had been shipped in two large batches, each totalling “no fewer than 30 platforms”.

“The first batch was delivered last December [2018], while the second one arrived in Vietnam in late February [2019],” said the sources at the time, adding that the VPA received the MBTs equipped with Kontakt-5 explosive reactive armour and “a turret-mounted missile countermeasures system”.