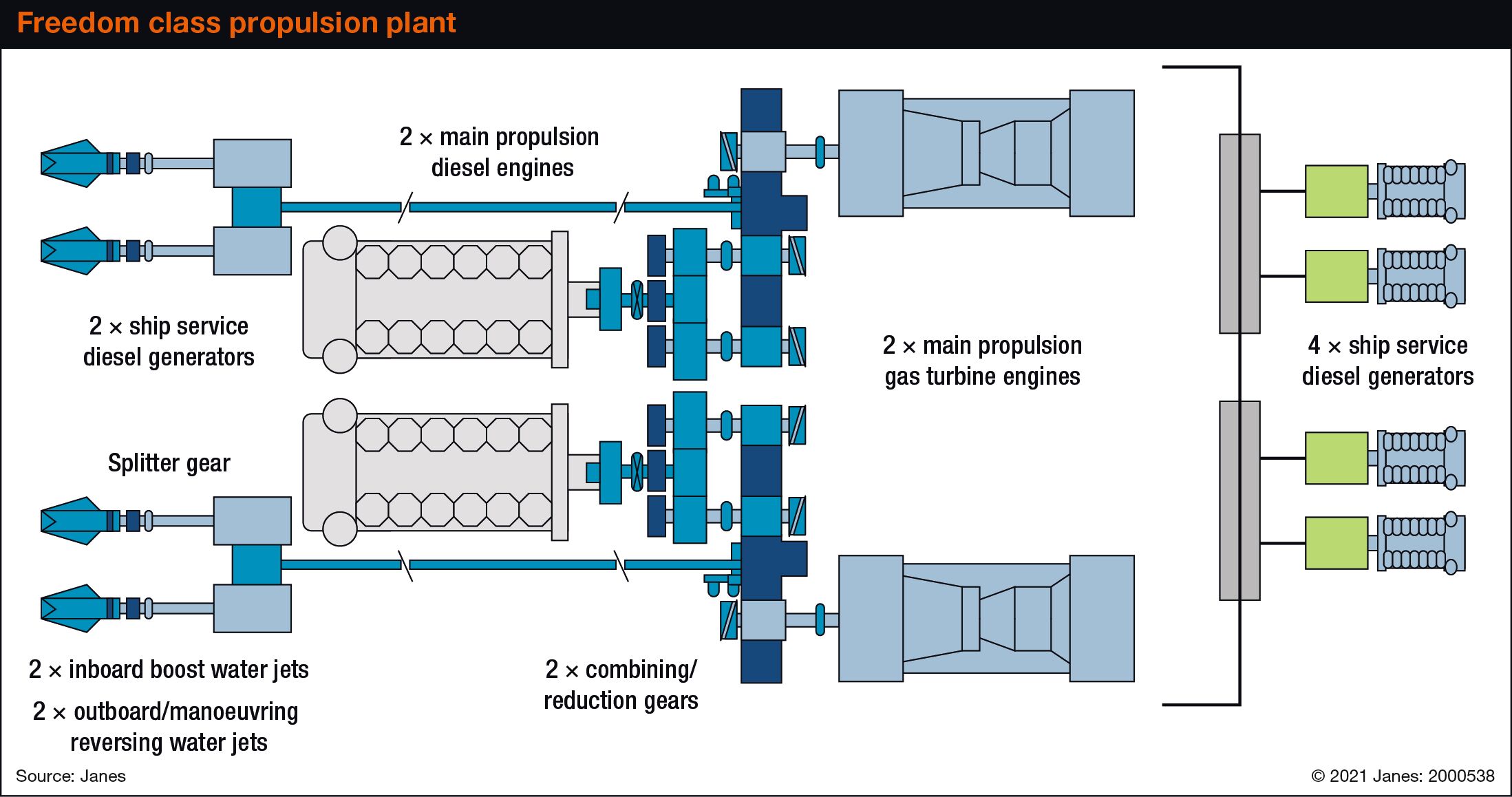 Naval engineers have described the Freedom-class propulsion plant as the most complex non-nuclear plant in the US Navy fleet. (Janes)

Perhaps no one stated the difficulty in solving the propulsion plant design flaws on the Freedom-class Littoral Combat Ships (LCSs) more than Admiral Michael Gilday, the chief of naval operations. Summing up the design problem, he said, “The issue with the combining gear is probably the most challenging engineering problem that we've seen on any class of ship since I've been in the navy.”

“We really forced industry to go back to the drawing board with respect to the fidelity of their engineering work, to do significant and rigorous shoreside testing before we approve that final [re]design,” Adm Gilday told reporters on 17 November.

Navy engineers who have studied the plant, operated the ships, and dealt with the issues that have sidelined some Freedom-class operations have told Janes thatthe plant is the most complex non-nuclear set-up in the USN – designed and developed specifically to sate the navy's need for speed in the littorals.

The company's FAST Labs directorate was awarded the “multiple development contracts” in November, according to a company statement. “While still in the early development phase, quantum sensing relies on fundamentally different physics than conventional antennas. This may allow us to circumvent traditional aperture design limits for sensitivity and size,” Julia MacDonough, product line director at BAE Systems, said in the statement.

Through the adoption of quantum sensing technologies, QA-enabled antennas “can reduce size and increase sensitivity and accessible bandwidth by several orders of magnitude. This can reduce the size and number of antennas on [US armed forces] platforms,” company officials added. The November announcement comes three months after agency officials selected research and development (R&D) teams from Honeywell, Northrop Grumman, ColdQuanta, and SRI International to participate in the QA antenna development effort.

A little over 18 months after axing the Air Support to Defence Operational Training (ASDOT) programme, the UK Ministry of Defence (MoD) and the Royal Air Force (RAF) have revealed details of their ambition to transform air operational training infrastructure to better meet the demands of the RAF's fast jet force.

Announcing its plans in a market information pack issued on 30 November, the MoD said that its Next Generation Operational Training (NGOT) construct is intended to create a joint “operational training ecosystem” containing complementary capabilities within two initially separate pillars of live and synthetic activity. The ultimate aim is to converge both within a cohesive live, synthetic, and blended operational training capability post 2030.

Front line commands receive operational training and assurance support in the air environment, through a mix of synthetic and live capabilities. Live ‘aggressor' and electronic warfare (EW) capabilities are provided by substantive contracts running through to 2024–25, with support from the RAF EW training and test facility at RAF Spadeadam in Cumbria.

The European Union (EU) intends to expand its Coordinated Maritime Presence (CMP) concept from from the Gulf of Guinea to the Indian Ocean to create an “arc of security”, according to EU officials.

“We are considering creating a new maritime area of interest by enlarging the CMP concept into the Indian Ocean,” said Stefano Tomat, senior security policy official at the European External Action Service (EEAS), during a 30 November hearing of the European Parliament's security and defence sub-committee.

With most of the EU's commerce passing through the arc's two arms – the Gulf of Guinea and the Red Sea – Tomat said “these are critical trading routes which are also becoming core areas of competition among the world's largest powers. It will be essential to cover this area to ensure our economic and security interests.”

Nathalie Loiseau, the sub-committee's chair, agreed. “This is as important for the EU as it is for the coastal states involved. A [new] CMP is very much necessary to provide us a better operational picture in this large maritime area.”

The EEAS aims to get political approval from EU leaders to launch the new CMP in March 2022.